Steel Corrosion and Control in Concrete Made with Seawater


Background: Water scarcity is amongst the biggest problems the world is facing in the 21st century. To reduce the consumption of Potable Water (PW) in construction industries and to make concrete construction more sustainable, its replacement with Seawater (SW) has been explored. Technical literature on this subject is not widely available. Such investigations are necessary for determining suitable remedial measures for the effective utilization of seawater for making sustainable concrete.

Objective: In the present study, use of Seawater (SW) has been explored as both mixing and curing water in concrete. To counter the adverse effects of seawater on strength and corrosion resistance, use of Fly Ash (FA) and Red Mud (RM) as cement replacements in the seawater concrete had been investigated.

Methods: The possibility of the use of seawater in making concrete has been explored by literature and experimental investigations. The obtained results are discussed in light of the information available in the literature. Various tests were performed such as compressive strength, Half-cell potential, electrochemical impedance spectroscopy and microstructural analysis using SEM and XRD.

Conclusion: Combination of both FA and RM in SWC reduces chloride migration and increases chloride binding by the formation of Friedel’s salt. Half-cell potential (HCP) and Electrochemical Impedance Spectroscopy (EIS) results confirmed a reduction in corrosion rate in SWC specimens with fly ash and red mud. 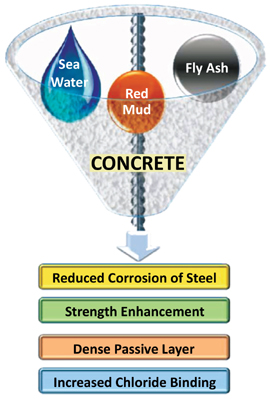